The christening ceremony of the Eco Catania – the new ro-ro vessel delivered to the Grimaldi Group in early June – ended just a little while ago at the port of Catania. This is the fifth of 12 hybrid ships belonging to the innovative GG5G (Grimaldi Green 5th Generation) class and ordered by the company from the Chinese Jinling shipyard located in Nanjing.

The event was attended, among others, by representatives of local authorities and the port community of Catania and a large representation of the main Sicilian customers of the Neapolitan shipping company. The ceremony began with greetings from Catania Mayor Salvo Pogliese, Eastern Sicily Sea Port System Authority Commissioner Alberto Chiovelli, Eastern Sicily Maritime Director Giancarlo Russo, and Grimaldi Group Executive Manager Eugenio Grimaldi.

Catania Metropolitan Archbishop Mons. Salvatore Gristina then proceeded to the bless the Eco Catania. The ceremony ended with the cutting of the ribbon by the Godmother Letizia Santonocito, Mayor Pogliese’s wife, and the traditional breaking of the bottle.

Just as her four hybrid GG5G-class sister vessels already in service in the Mediterranean, the Eco Catania is one of the largest and most eco-friendly ro-ro ships in the world. With a transport capacity of over 500 trailers, these green giants are able to halve CO2 emissions compared to the previous generation of ro-ro ships operated by the Grimaldi Group, and even to reduce them to zero while they are at berth: during port stays, GG5G-class ships can in fact use the electrical energy stored by mega lithium batteries with a total power of 5MWh, which are recharged during navigation thanks to shaft generators and 350 m2 of solar panels. Moreover, they are equipped with state-of-the-art electronically-controlled engines and an exhaust gas cleaning system for the abatement of sulphur and particulate emissions.

“We are proud and grateful that a prestigious company such as Grimaldi Lines has named one of the most modern ships after Catania – a vessel equipped with advanced ecofriendly systems capable of protecting the environment“, declared Catania Mayor Salvo Pogliese. “This is an innovative approach to maritime transport that we share, as it is in line with our attitude to combine development with environmental protection. We are facing new job opportunities and productive investments that see the Grimaldi Group and family at the forefront to support the City of Catania in the path of recovery and growth of our territory, an objective to which we are committed every day, in harmony with all the entrepreneurs who bet with innovative visions“.

Eastern Sicily Sea Port System Authority Commissioner Alberto Chiovelli also underlined the importance of investing concretely in the sustainable development of the Sicilian port, just as the Grimaldi Group did by dedicating one of its most modern and eco-friendly ro-ro vessels to it: “The Eco Catania is a concrete reality that combines development and sustainability, an important entrepreneurial initiative consistent with national and community planning. We must seize the development opportunities that this important initiative offers us, also in terms of employment, continuing with the infrastructure development programs in the port of Catania in order to make it increasingly capable of providing adequate responses and guaranteeing a virtuous growth of the port system as a whole“.

“The city of Catania has hosted us for over 15 years, and we are extremely proud to christen the largest and most sustainable ro-ro ship in the world here today,” said Eugenio Grimaldi. “Over the last year the ports we serve, as well as our ships and our workers have never stopped, and Catania and Sicily as a whole have shown how important trade is to allow the country to survive. This is why, once again, I thank the whole Sicilian port community for the precious contribution of its workers who, together with our seafarers, have distinguished themselves in this unprecedented challenge“.

In the coming days, the Eco Catania will begin to operate regularly between the ports of Genoa, Livorno, Catania and Malta, joining her sister vessel Eco Livorno which is already in service on the same route. 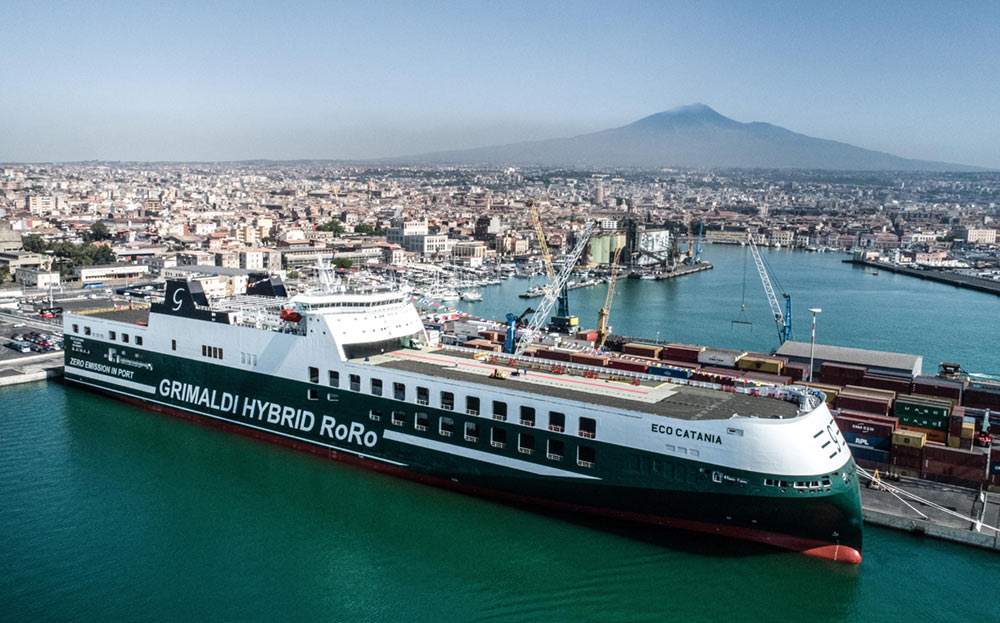 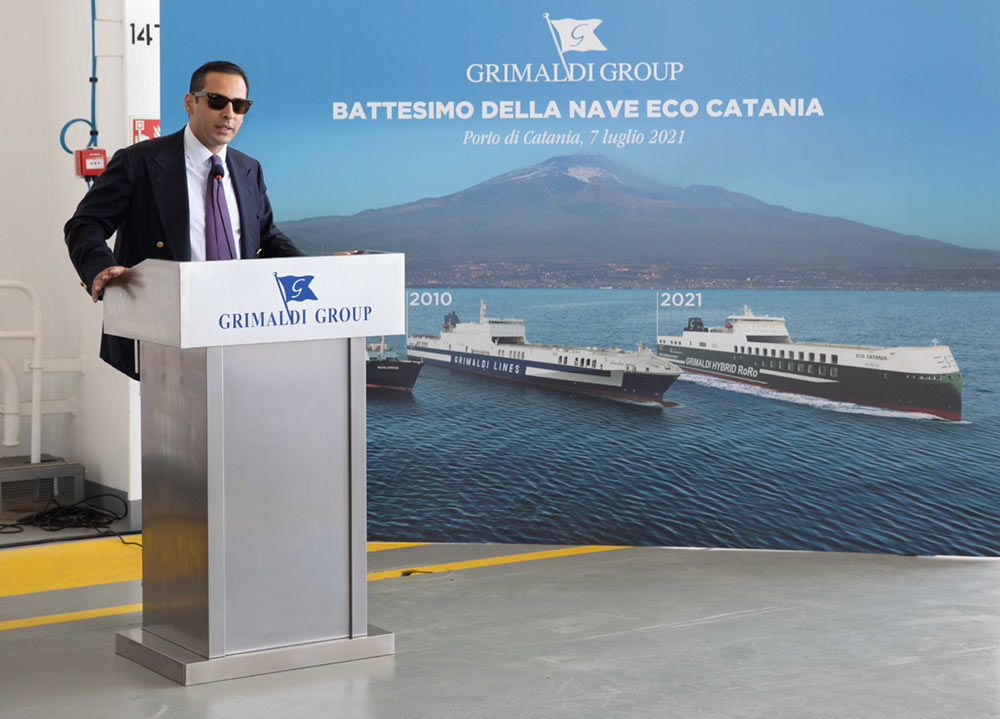 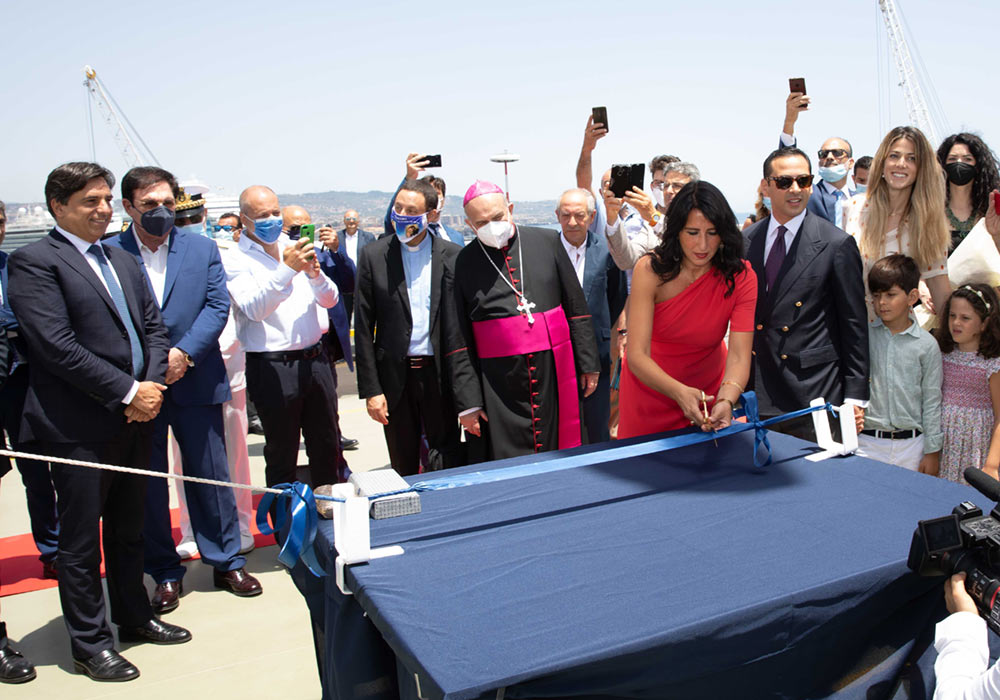 This website uses cookies to improve your experience while navigating through the website. These cookies store the cookies that are categorized as needed in your browser, as they are important for the basic functions of the website to work. We also use third-party cookies to help us analyze and understand how you use this site. These cookies are only stored in your browser with your consent. You also have the option to opt out of these cookies. However, opting out of some of these cookies may have an impact on your browsing experience.
Necessary Always Enabled
Necessary cookies are absolutely essential for the website to function properly. This category includes only cookies that ensure basic functionalities and security features of the website. These cookies do not store any personal information.
Non Necessary
Any cookie that may not be particularly necessary for the website to function and is used specifically to collect the user's personal data via analytics, advertisements, other embedded content is referred to as unnecessary cookies. It is mandatory to obtain the user's consent before these cookies are run on your website.
Save & Accept
Powered by